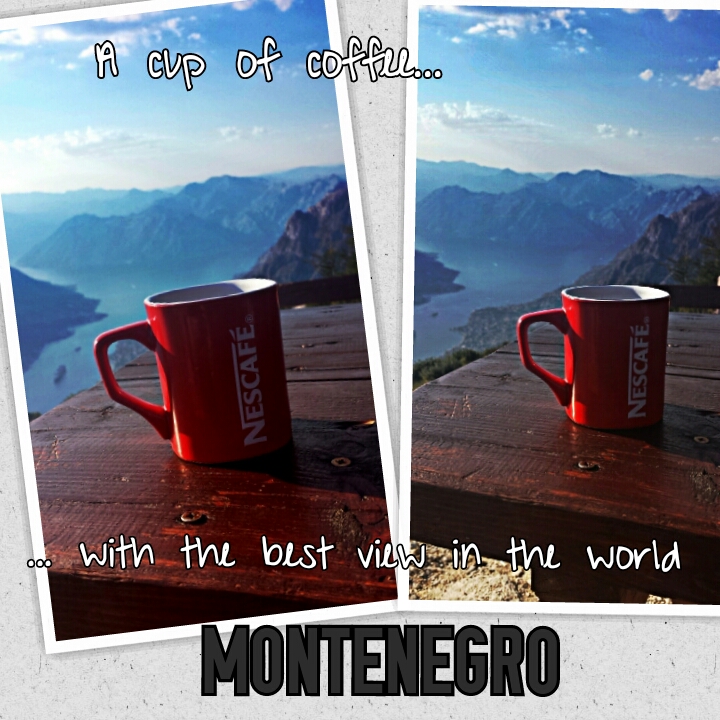 Hello and Happy Friday!!! This installment of Bevs-around-the-world will be the simple cup of coffee.

In Montenegro (and much of the Balkans), the preferred style of coffee is Turkish Coffee. I was lucky enough to stay a hostel that offered unlimited Turkish coffee (the fantastic, must-stay-there-if you’re-ever-in-Budva Montenegro Freedom Hostel). The thing with complimentary Turkish coffee throughout the day is you’ve got to learn how to make it. Once the owner showed me, I became a skilled creator of the perfect cup of coffee.

This new-found knowledge certainly did not dissuade me from trying anyone else’s Turkish coffee however.

After an all-day tour of the most beautiful sights I’ve ever seen (this might be hyperbole, this might not be. I legitimately cannot think of any other view at this moment that compares to     Lake Skadar), our tour guide stopped at a little stall on the side of the road that sold cheese, raki (Balkan brandy), meats and coffee, and said, “This is my favorite coffee in Montenegro.” When I asked why, he replied, “ It has the best view in the world.” 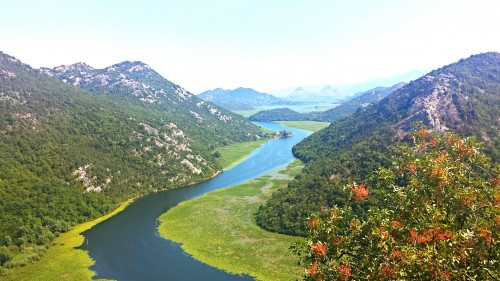 See what I mean?

His statement wasn’t far from the truth. We each ordered a cup of coffee (the two Russian girls I was with content to sample the cheese and meat and buy plum raika) and sat on a picnic table, watching the sunset over Kotor Bay. 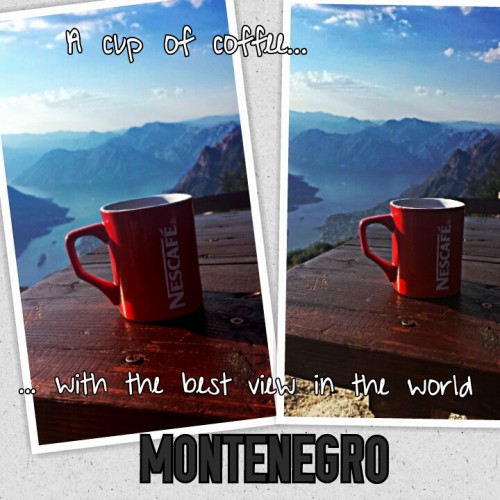 It is one of the views that is so beautiful it’s impossible to capture, but this quiet little moment on top of a mountain in Montenegro remains one of my favorites.

Happy Friday! Who need a cocktail? Luckily, It’s 5 o’clock Somewhere. For my Friday Vegan Mofo, I’ll be focusing on beverages–sometimes with alcohol, sometimes without.

Some of the most creative cocktails I have had the pleasure to sample on this trip were at Bon Vivant, in Edinburgh, Scotland. 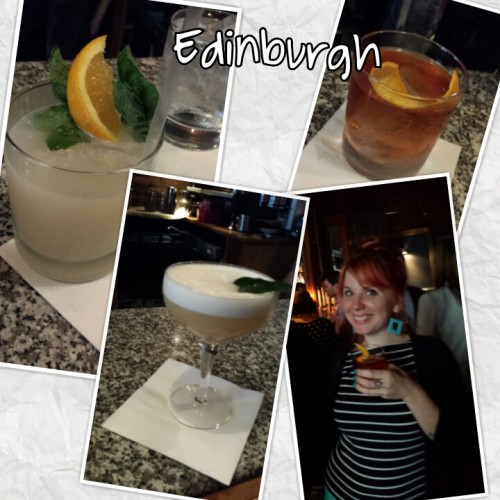 I’ve been typically sticking to beer or wine, but my travel companions and I had heard from several different sources that Bon Vivant on Thistle Street is THE place to go for quality craft cocktails. My friend Dave, who recommended the place to me, compared it to Teardrop in Portland, Oregon. Sold. (Teardrop is the place where I tried a specialty bourbon cocktail with smoked ice cubes a few years back. SMOKED ICE CUBES.)

The menu, which changes seasonally, is overwhelmingly intriguing; I wanted to try one of everything. In addition to the multiple page menu, they also have an extensive champagne and bubbly list. If I had my druthers, and bottomless pockets, I would have stayed for several cocktails and a few bottles of bubbles. As it was, we each picked just one to sample. 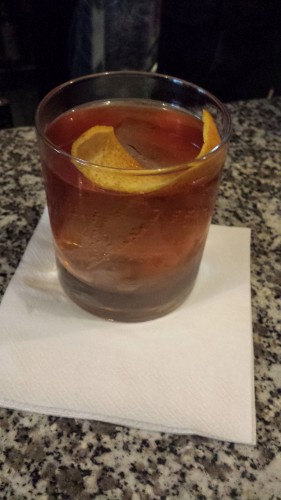 The Volunteer at Bon Vivant

My drink of choice was The Volunteer: Gentleman Jack, Ardbeg 10yr Scotch, Noval Port, demerara syrup, chocolate bitters and an orange twist. Scotch is not usually a palate-pleaser for me, but the precisely measures liquor and mixers led to a pleasantly round and full-bodied drink, with a touch of sweetness from the orange and finished with just a slightly peaty taste from the scotch. When I’m in places where I know I can trust the menu and the bartenders to put care into each cocktail, like Bon Vivant, I’m more likely to step out of my comfort zone and order somethinglike this. And I’m usually rewarded, as I was in this case.

*Note, some cocktails are made with egg white, so take care when reading the menu. 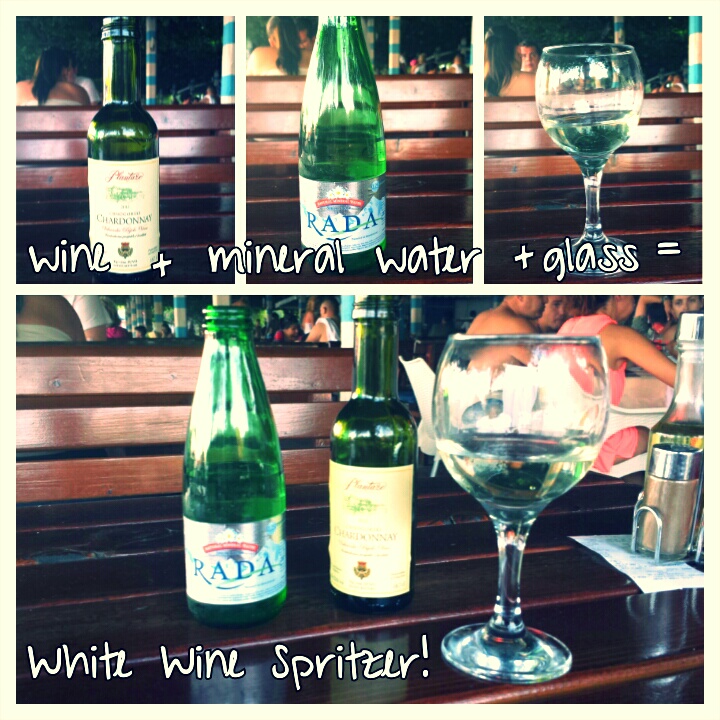 All the ladies who enjoy white wine spritzers, put your hands up!!!
Oh. It’s just you middle-aged moms and me huh? Well ladies, I think we’re on to something.

As is a well-documented fact (it will be the number one item on my Wikipedia page when I get one), I love anything with bubbles. Any beverage that is slightly effervescent or even offensively carbonated automatically heads to the front of my classroom. The number one fave is sparkling wine. Cava, Champagne, Prosecco;  if it’s bubbly and served in a flute, I’m thrilled.  But give me a mineral  water, tonic water or soda water and I’m so much more content than with boring old flat tap water. Kombucha? OK!  Beer? Sure. My greatest dream is to own a Soda Stream where I can carbonate everything I drink all the time. Bubbly coffee. Bubbly tea. Bubbly green smoothies. You name it, I’ll bubble it.
When I arrived in Vienna, Austria, my first stop in Eastern Europe, I noticed spritzers frequently on bar menus. Bubbly Wine. ALRIGHT.
Throughout the rest of my travels in Eastern Europe—Brno, Bratislava, Budapest, Novi Sad and Budva–I saw with alternating popularity white wine spritzers offered at cafes and bars. This is a trend I can get used to. If you’re still gently mocking me in your mind (fair; I have the taste bud attention span of a child), I give you my top three reason for drinking white wine spritzers while traveling:
1. Spritzers are cheap. Half soda water (or 7-Up if you’re feeling sweet) and half wine equals half the price of a glass of wine, which is already affordable in Eastern Europe  (I’ve seen glasses priced on average under $2, and generally no more than $4). At one place in Novi Sad, the waiter asked me the percentage of wine to mineral water that I wanted. Of course I said more wine than water–OF COURSE–but it’s even then it’s still wicked cheap. This is a great reason to drink spritzers when you’re backpacking through Europe and every euro counts. (Note: as this is a food, drink and travel blog, I’m clearly not going to travel through Europe and NOT drink, so hush that thought right now.)
2. Spritzers are ubiquitous. They  are actually listed on the menus! People drink them! It’s a real-live honest-to-goodness drink, it’s not a made up mom drink, like in the States. It’s legit. And you know what they say: When in Vienna… (or in Brno, or in Budva, etc…..)
3. Spritzers are safe. As a solo female traveler, I do want to be careful about how much I drink. And I do like to drink. So a watered down glass of wine? Can’t get much less alcohol than that. I’ll take three, please.
So next time you come traveling with me, or on your badass solo trip, think about these three great reasons for the white wine spritzer and don’t feel embarrassed ordering one. A round of spritzers for everyone!

The capital of Slovakia, and its biggest city, Bratislava lies on the Danube, just an hour from Vienna and two and a half hours from Budapest. It’s a small picturesque town in Eastern Europe, and one I was looking forward to spending a few days in. While in Brno (Czech Republic) I heard from every single traveler that I came across (no exaggeration) that one night in Bratislava was more than enough. Some people had even changed their travel plans to move on without staying even one night. I knew it couldn’t be that blasé, and I’m drawn to small sleepy towns sometimes more than large cities, but I was really enjoying my time in Brno so extended my stay, cutting back into my Bratislava time. My original three nights in Bratislava were reduced to one. 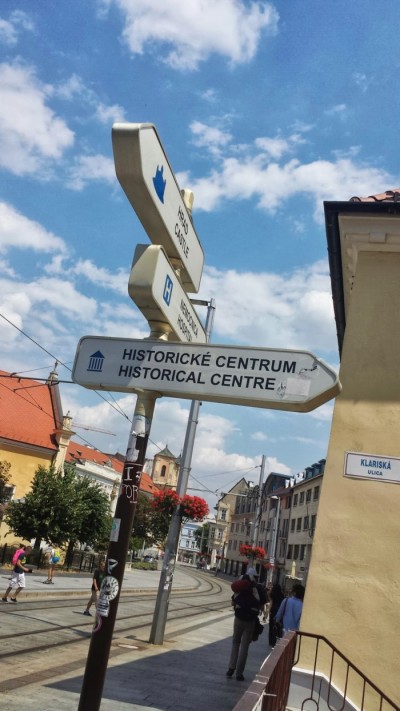 Which way to the wine?

The town center is a 20 minute walk from the bus station. Hostel Mansard, where I stayed, was centrally located. It made exploring a breeze. The only breeze I’d see that day, as Bratislava’s sun beat down on my skin, freckling my already too-pink sunburn.

Bratislava is a surprisingly vegan-friendly city. As I headed into town I passed a sign for a cafe that looked like it’d have vegan options, so I looped back after checking in. 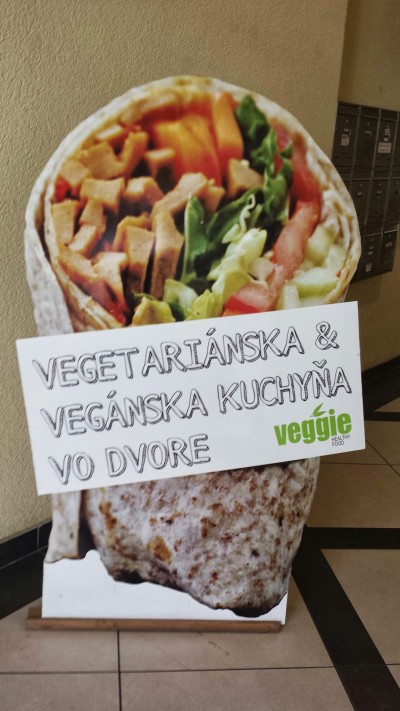 The basic menu includes 4 wraps, 3 of which were vegan. Score.

I ordered The London Wrap–made of spicy beans, robi meat, tomato, cucumber, lettuce and parsley in a whole wheat tortilla. The small portion is half a wrap, and only 2 euros (about $2.65 US). It was filling and hearty and actually had vegetables, sometimes a rarity in Eastern Europe, and I enjoyed it thoroughly. It also contained robi, a Czech vegan meat product made out of beetroot and cereal grains. I’m not entirely sure what that means, but I wasn’t scared–I had tried it in Brno, and it was delicious; not quite as chewy as seitan, with a deep flavor and a meatier texture than tofu. 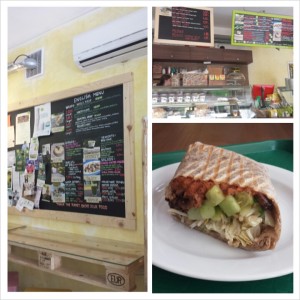 Properly fueled, I was ready to explore the city. After walking up the steep hill to Bratislava Castle during the heat of the day, I wandered around the outer gates, alternately worrying I hadn’t been successful in my sunscreen search yet and being amazed by the sights.

“This view is so pretty!”

“I hope I’m not getting skin cancer.” 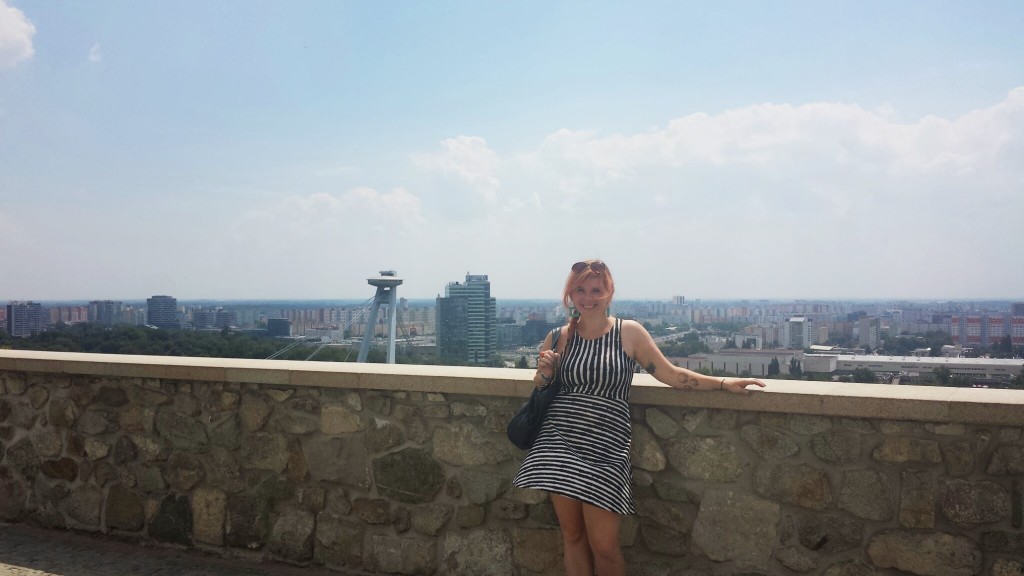 Slowly turning into one giant freckle

In the end, I wore my sandals out that day, flip-flopping my feet around Bratislava and working up even more freckles and a large appetite. For dinner, I already knew where I was headed: Lucy’s Vegan Food, a vegan and gluten-free bistro, was located close to the bus station and though they had a small menu, it all looked good. I knew I wanted to try them out and support an all-vegan restaurant in Bratislava. 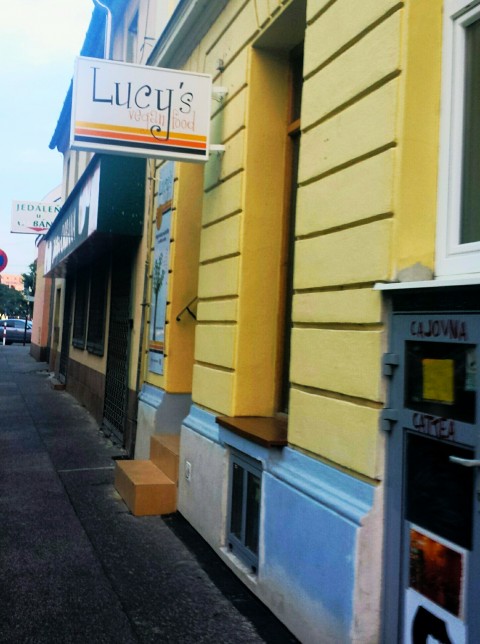 Lucy’s is open from 11 am to 3 pm for lunch, closed in the afternoon for prepping and baking, and open again for dinner from 5 pm to 8 pm. I arrived shortly after 5, the first guest to arrive. Tim and Lucy, the owners, chatted with me while I ordered. Tim is from Canada and Lucy is from Slovakia, and after meeting on the road and traveling together for a few years, they decided to settle down in Bratislava and share the food with the public that they made at home.

I enjoyed a raw vegetable salad and a spicy rice noodle dish with a few glasses of rosé‎ wine and chatted with the two owners. It’s a small place–only a few tables–so it’s ideal for lunchtime office workers to get take-out, or for solo or couple travelers to linger over a meal. 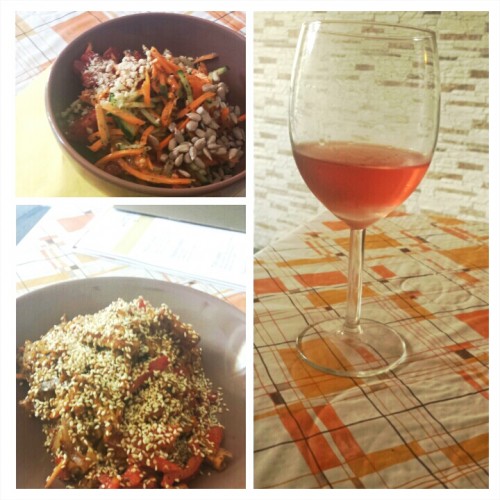 Tim and Lucy seem to be very clear in their vision of what they want, and are confident in their business choices. Lucy’s Vegan Food is a sugar-free gluten-free vegan restaurant with a limited menu that prefers not to allow children, and they’re unapologetic about it, which I found admirable and endearing. Tim creates the savory menu, and Lucy bakes the desserts fresh every day. As I was leaving, she gave me a banana cocoa muffin, which I had for breakfast the following morning. It was perfect. Moist and not too sweet. A hard combination to come by for vegan baked goods on my travels. The muffin remains my favorite vegan dessert I’ve had in Eastern Europe. 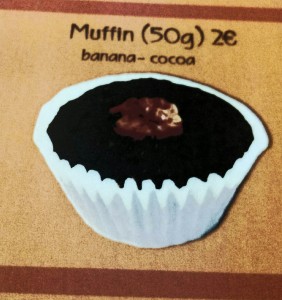 I stayed until close, getting tipsier from the wine and chatting their ear off. They’re lovely people, and it’s experiences like this that really make your travels–the night at the vegan restaurant, chatting with the owners and enjoying healthy vegan food in a small town in Slovakia, is really one to remember. One of a kind. For anyone who makes it to Bratislava, I encourage you to visit Lucy’s. The owners are welcoming and the food is a pleasant healthy and satisfying break from the heaviness of Eastern European food.

Bratislava is indeed a small town, and the people I met there are generous and kind. One night’s stay was perfect, though I imagine I could spend a lot more time there, exploring the surrounding hiking trails and frequently indulging in good vegan food. 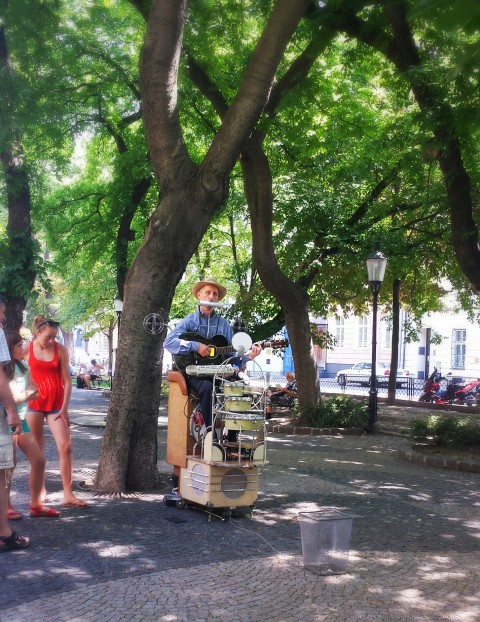 Note: There were several other vegan or vegan-friendly eateries in Bratislava that I didn’t visit, but Vegan in Brighton has a good recap from her visit a few years back.