It’s been just over a month since I left the BridgePort Ale House.
In that time I’ve accomplished a lot and I feel so lucky, happy, blessed, productive, excited, accomplished and busy because of it!
5 Reasons why I feel happy (plus 2 extras at the end):
DEMAND STUDIOS
I applied for and was accepted to write freelance articles for Demand Studios. Demand Studios owns websites like e-how. I had to come up with a writing resume (much easier than I thought it would be at first) and now I can choose to write articles on pretty much anything whenever I want. I’m paid a small amount per article, which definitely helps out!
So far I’ve written:
* the benefits of coconut oil
* how to make ginger tea
* nutritional facts in Zone Diet bars
* party snacks on a budget
* ingredients for easy cake recipes
It’s a great freelancing opportunity (thanks Lindsey at Happy Herbivore for the suggestion!) that I am happy to have.
CULTUREMOB PORTLAND CITY EDITOR
I recently became the Portland City Editor of CultureMob; the online urban entertainment website and blog. Writing an article a week, I’ll focus on Portland life. So far I’ve written about Musicfest NW (going on right now!) and the Best of Belmont.
If you have any suggestions or tips, I’d love to hear them. Please leave them in the comments below.
This is so much fun already!
PORTLAND VEGAN EXAMINER
The Examiner is a nationwide online resource with many different specializations. After a lengthy application process and background check, my first article was just published today. I guess it was actually too long, so it’s been broken up into 4 articles. All four articles center around the theme of eating vegan on the cheap. I’ve thrown in several easy recipes as well.
I’m aiming to write 3 or 4 articles a week focusing on all things vegan in Portland. If you have any suggestions for story ideas here I’d love to hear them.
I’m so excited to begin writing for the Portland Examiner.
EPICURIOUS VEGAN
Of course I’m also writing this here blog. There’s all sorts of fun and awesome opportunities that go with writing Epicurious Vegan. Most recently: Susan, part of the founding team of Go Max Go, was kind enough to grant me an interview, which I just posted here. Keep checking back; I’ll have more interviews, recipes, and perhaps some giveaways in the near future.
BACK TO EDEN
Back to Eden Bakery Boutique is opening next Tuesday, September 22nd. Garrett and John, the owners, are dear friends of mine. I’ve been helping them with the process since April and I am incredibly excited for this vegan bakery boutique to finally open! It’s definitely crunch time right now, but come Tuesday everyone can see the hard work and passion that these boys have put into Back to Eden, and I’m so thankful to be a part of it.
And 2 to grow on:
* I’ve taken up running! I love it. Who would have thought? I really need new shoes though! Mine are 2 years old and hurt my knees every time I go out.
* This time in a month I’ll be in Turkey! Wandering through ancient bazaars, sipping turkish coffee, kayaking over sunken cities, visiting sea tortoises, walking along the Angean Sea coast… I love traveling to new and exciting places and immersing myself in the culture. As nerve-wracking as it can sometimes be, traveling opens up so many doors and pathways in your head and in your heart. I can’t wait.

I recently accepted the Portland City Editor position for CultureMob, a website that guides folks to all the cultural hub-ub.

I wrote my first article on the upcoming Musicfest NW. 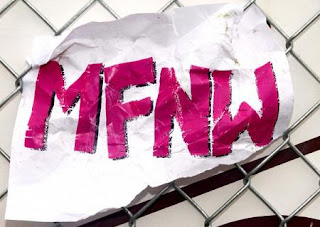 You may remember my blog entries about it last year. If not, here’s some reminders:

Here and here and here. My favorite is all the tequila I had. Sheesh. What was I thinking? I’ll never do that again. (Until September 16th. Ha.)

And one of my favorite pictures/memories from last year:

I just published my first post today. Check it out here.

PS I’m making a S’more Pie tonight. I don’t want to eat it. (I don’t have dental insurance anymore! Gotta watch those cavities.) Let me know if you want it.

I’ve been hearing about Gardein products for awhile now. I’m sure you have too. They’re all vegan (unlike Quorn or some Morningstar and Boca brands that contain egg) and made by the Garden Protein International Company based in Canada, eh.
The ingredients are a mixture of wheat gluten, soy and pea protein, and natural flavors.
There are a few different kinds on the market, including a “beef,”  “chicken” and “pork”. I bought the BBQ Pulled Shreds and the Veggie Chick’n Bites in a Provencale Marinade.
I have to admit, I was a little trepadacious when I bought them. I typically try to stick to a whole foods diet. I’d rather eat beans and veggies and bread and fruit then eat complicated replications of animal-based foods. That said, there is one huge benefit for this product. Many people transitioning to whole- or part-time vegetarianism need transition foods. It’s a lot easier to cook up some Gimme Lean soy sausage for in the morning than to make a hippy-dippy lentil loaf. Vegetarian and Vegan diets take time, and ease of transition. Companies like Gardein do a huge deal of good in easing the casual meat eater into an animal-free diet.
Especially with the bloooming-in-popularity Meatless Mondays, having great tasting options for meat-free meals is pretty  neccessary.
So, how did they taste?
I tried the chick’n bites first.
VEGGIE CHICK’N BITES 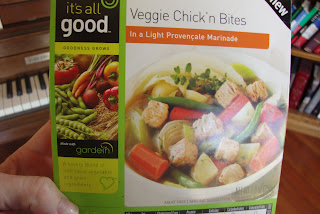 I’m definitely a carbohydrate-lovin’ girl, so naturally I had to try it first with some pasta.
I simply cooked up some capativi noodles, steamed some broccoli, then sauteed them together with the chick’n bites.
It was remarkably easy. I threw in a sprinkling of nutritional yeast (of course) and a few cranks of fresh-ground pepper.
This is what it looked like: 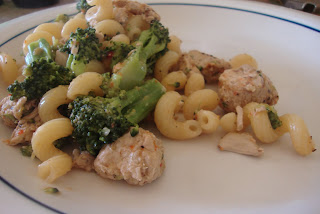 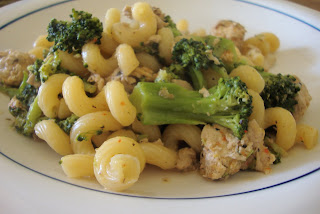 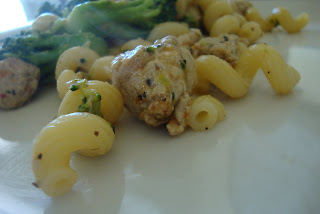 Yep. That’s right. My lunch yesterday was DELICIOUS. The chick’n heated up in about 4 minutes. There’s 2 servings per package, which was perfect. I ate my leftovers for dinner.
I haven’t eaten any part of chickens in over 20 years, so I don’t remember what they taste like, but I don’t think this was too similar. It just tasted like nice herbs and spices and had a good chewy texture.
BBQ SHRED SANDWICH
Today I stopped by Whole Foods to pick up some buns for my BBQ pulled shreds experiment. I found a pack of four Delphina’s panini rolls. Which, I just want to say right here, are amazing. I love them. I want to eat them all the time. Sooooo good. Delphina is a Portland-based bakery. I’ve never tried their baked goods before, but these rolls are seriously serious. Seriously super. Since I only needed one, I put the other 3 in the freezer to use later. I don’t want these to get moldy! 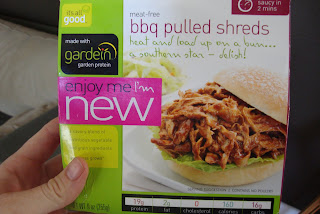 So simple to make. Can you read the writing? It says, “Heat and load up on a bun…” Easy-peasy.
I toasted my Delphina’s bun while heating the bbq shreds up on the stove. After the bun was toasted, I spread some Earth Balance on one side (and nutritional yeast, of course) and some Wildwood Garlic Aioli on the other. I had to ask my roommate, “People eat mayo with pork sandwiches, right?” (He answered, “Some people eat mayo with everything.” Ha!)
Threw some spinach on that bad boy, and watch out: 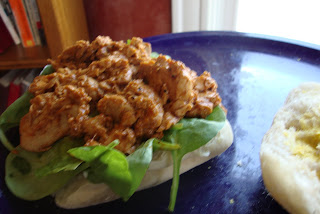 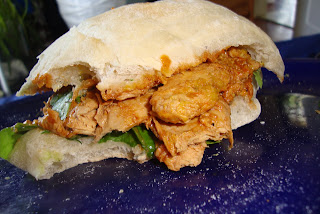 That first picture is a little blurry, sorry. I think my hand was shaking from hunger.
The texture was super similar to the chick’n bites. I’m not sure if they use the same ingredients and ratio for the protein part and just change the sauce, but that’s what it seemed like to me.
The bbq sauce was definitely of  the sweeter variety. I think I’m personally fond of more of a smokey or spicy taste, but the sweet flavor worked pretty well.
This sandwich was super. Simply delicious. It was moist and toasty and filling and pretty much perfect.
Both these Gardein products are super easy to make, taste amazing, and are enough to serve two. The only drawback is they are rather expensive–it’s about $4 for one packet. That’s too much for me to buy very often, but when I have an animal-eater friend come over for a meal, these will perfect meal-helpers.
Have you tried any Gardein products? Leave a comment and let me know what you think about them.

So, who hasn’t heard of this?

Well, I sure have. I know a few extremely prolific bloggers received one from the company in order to get others’ talking. Talking = Buying.

I need one. NEED one. NEEEEEEEEEEED.

I can’t think of anything else.

Just look at how amazing it is:

Refurbished. It was more money than one would typically spend on a month’s rent (only slightly exaggerating), but I have a pretty strong feeling it’s totally worth it.

I’m going to make nut butters (peanut and almond, specifically, but really anything that strikes my fancy), soup (the blades get so hot, you can put in whatever veggies you want, and a mere few minutes later, you’ve got hot veggie soup), green smoothies (watch out, kale. I’m going to OWN you.), fruit ice cream (totally vegan, and get this, HEALTHY. Hello!), and probably about 3 billion other things I haven’t discovered yet.

Next week sometime my extremely expensive VitaMix will arrive at my door, and I will not leave my house for the next year, give or take a year.